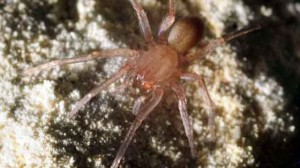 According to court documents, the rare spider was a key factor in putting Ballenger Construction Co. out of business.  Ballenger had been in business since 1937, but they were struggling after oil and fuel costs came in over budget which made jobs far more expensive than originally bid.  While working on the highway underpass in August, 2012, the workers came across an underground cave that held a small Braken Bat Cave Meshweaver spider.  This is a rare, eyeless spider that hadn’t been seen in three decades.  The biologists shut down the job so they could investigate the environment that had been home for that lonely spider.
Eventually, Ballenger filed bankruptcy in December and went into liquidation.  They laid off 550 workers and sold most of their equipment at a bankruptcy auction in April for $9.6 million.  The auction money was used to help pay off the $16 million in debt to Frost Bank.  A replacement contractor has been found to finisht he underpass project.  They are being funded by Ballenger’s surety, Liberty Mutual.  Liberty has quite a big task.  They have to complete $112,000,000 in work left to finish to Texas’s Department of Transportation.
By Cheryl Foley| 2013-08-14T14:08:27+00:00 August 14th, 2013|Surety Blog|Comments Off on A Single Rare Spider Stops $15.1 Million Underpass Projects for Months in San Antonio, TX