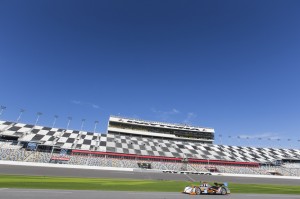 Fans that attended this years Daytona 500 watched it from the middle of a complex construction project. A project that is changing the track’s front-stretch grandstand area into what officials call a “motorsports stadium”. The new grandstands in Turn 1 opened a new high-rise view of the speedway for the first time in 500 history.

The new 40,000 seat grandstand, which includes new elevators, escalators and large concourse areas, is just part of “Daytona Rising”, the $400 million construction project that is remaking NASCAR’s famous speedway. The new seating goes high above the track’s previous grandstand, giving those in the highest seats a bird’s-eye view of the entire 2.5-mile track and the road course that twists throughout the infield. Track president Joie Chitwood said the construction project is on schedule and on budget – expected to be completed in January 2016, just before the season opener of the NASCAR schedule. The other half of the construction project will include new seating in the Turn 4 area and the tower suites. Demolition of the press box, race-control booths, and sky-suite overlooking the start-finish line. The removal of the tower will “require the use of a huge crane that will be delivered to the project site piece by piece in 30 trucks” then assembled on site, Chitwood said. According to track officials, by the end of all this construction, “the seating capacity will be reduced from 145,000 to 101,500. The backstretch grandstands will be removed this summer, subtracting about 45,000 seats from the track’s inventory.”

I went to the speedway during speedweek and it was interesting to see all of the new construction going on and a how part of the new venue was inner-twined with the old venue. I’m sure it was challenging for those behind the scenes to figure out a way to manage the crowd flow and keep the fans happy. Overall I think they figured it out pretty well.