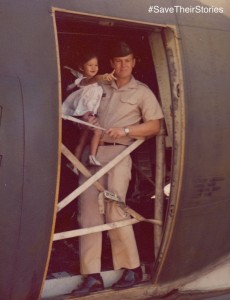 Keep your eyes peeled for the Academy Award-nominated documentary, Last Days in Vietnam.   The film is set during the final days of the Vietnam War, as the North Vietnamese Army advanced on Saigon.  Through personal interviews and never before seen footage, it documents the heroic actions of Americans who arranged for the evacuation of their South Vietnamese counterparts, at great personal and professional risk.

Directed and produced by Rory Kennedy in commemoration of the 40th anniversary of the Fall of Saigon, Last Days in Vietnam will air on PBS on Tuesday, April 28that 9PM ET and will be available for on-line viewing afterward.  Watch for Col. Stuart Herrington (Ret.), the father of Florida Surety Bonds team member, Kim Niv.

(Pictured above is Captain Stuart Herrington and Kim Niv aboard a C-130. On April 22, 1975 Captain Herrington put Kim and her family onto a U.S. Air Force C-130 at Tan Son Nhut Air Base in Saigon, Vietnam. They flew to a safe haven in Thailand while Captain Herrington stayed behind to assist with the evacuation)