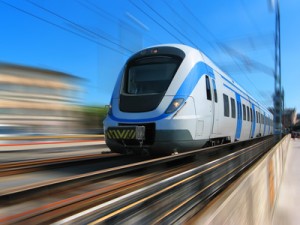 The Florida DOT approved plans this week for construction of a privately funded electro-magnetic suspension rail line in Orlando. It will be the first of its kind not only in Florida, but in the United States.

The first phase will be a 13.8-mile elevated track costing around $300 million between Orlando International Airport and the Orlando/Orange County Convention Center, according to American Maglev Technology, who plans to build the system.

Georgia-based American Maglev Technology (AMT) has been promoting green technology in the United States for 20 years. According to the spokesperson for AMT, the system uses lightweight cars which glide one-centimeter above a steel guide rail through counter-acting forces of 24 electro-magnets and gravity.

On Monday the FDOT gave American Maglev Technology the go-ahead to negotiate right-of-way leases. The train will most likely originate at the city’s airport in a terminal which will also be used by the privately financed All Aboard Florida train that is planned to go between Orlando and Miami.

They anticipate breaking ground this fall and be completed by 2017.