Trouble Ahead for Tampa’s Cruise Industry?

Home/Surety Blog, Uncategorized/Trouble Ahead for Tampa’s Cruise Industry?
Previous Next

Trouble Ahead for Tampa’s Cruise Industry? 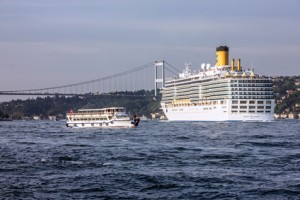 Tampa’s cruise industry has a problem. The Sunshine Skyway Bridge is too low to accommodate the “mega” cruise ships of the future. The Florida Department of Transportation organized a pre-feasibility study to assess their options of either replacing the 27-year-old structure, or building a new port seaward of the bridge.

The 4.1 mile Sunshine Skyway Bridge has a vertical clearance of about 190 feet, which is too low to accommodate the ever growing cruise ships of the near future. Actually, it’s barely tall enough for the majority of existing cruise ships that are there today.

It was estimated it could cost up to $647 million to build a new port. The estimate was based on a four-berth facility with terminals measuring at least 100,000 sq. feet, a six-level parking garage, and other ground transportation areas. There are problems with this option. To start, the channels in the area are too narrow for safe two-way cruise traffic. Also, they found that there is a 965 foot limitation on a cruise vessel length due to the Sparkman channel and turning basin. There are obviously a few things that would need to be re-evaluated if this would be the solution they go with.

The options for replacing the existing bridge are more expensive. Estimates are ranging from $1.5 billion to $2 billion; the FDOT looked at a few alternatives:

Or a forth option….do nothing. This option would come with negative consequences, such as a significant loss of cruise traffic which would, in turn, cause a negative economic impact in the Tampa Bay area.

The question is still  lingering….a new port or a new bridge?