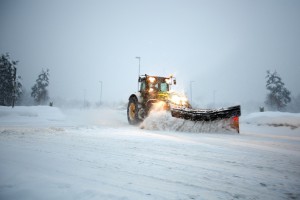 Despite how the Fed or the Congress spends our money, it is a real law of economics that every nation has a limited amount of money.  You may or may not be impressed at how much a country has, but for everyone, it is limited.  In beginning economics, we learned if a country spent more of their money on guns (defense and warfare), there would be less money for butter (domestic items) and vica versa.  A country had to choose.  This winter, we are facing something new.  With the severe cold up North and the major snowstorms rolling regularly across much of the country, the United States is having to spend an inordinate amount of cash on Salt (Snow removal and Management).   We’re pretty sure that Atlanta blew through their snow removal budget during that first storm and are now raiding other funds to handle this past week’s mess.  The other big fallout of all this snow fall is that it reduces consumer spending.  The economy was growing at a healthy rate of 3.2% in the fourth quarter of 2013.  Bring on the New Year’s snow, and our growth has stalled at something below 2%.  Even on-line spending slowed considerably possibly because people are spending more for home heating oil, and now have less to spend at Amazon.  It turns out, our economy is a complex and fragile system that can be affected even by the shift of a Polar Vortex.  Who would have thought?